The most popular topic last week was the Olympics, and the top 5 peaks of hourly Facebook posts and news articles all occurred when Taiwanese athletes have won a medal, with one exception when Taiwan’s table tennis athlete Lin Yun-Ju (林昀儒) played against China’s Fan Zhendong (樊振东) in the semi-final on July 29th. 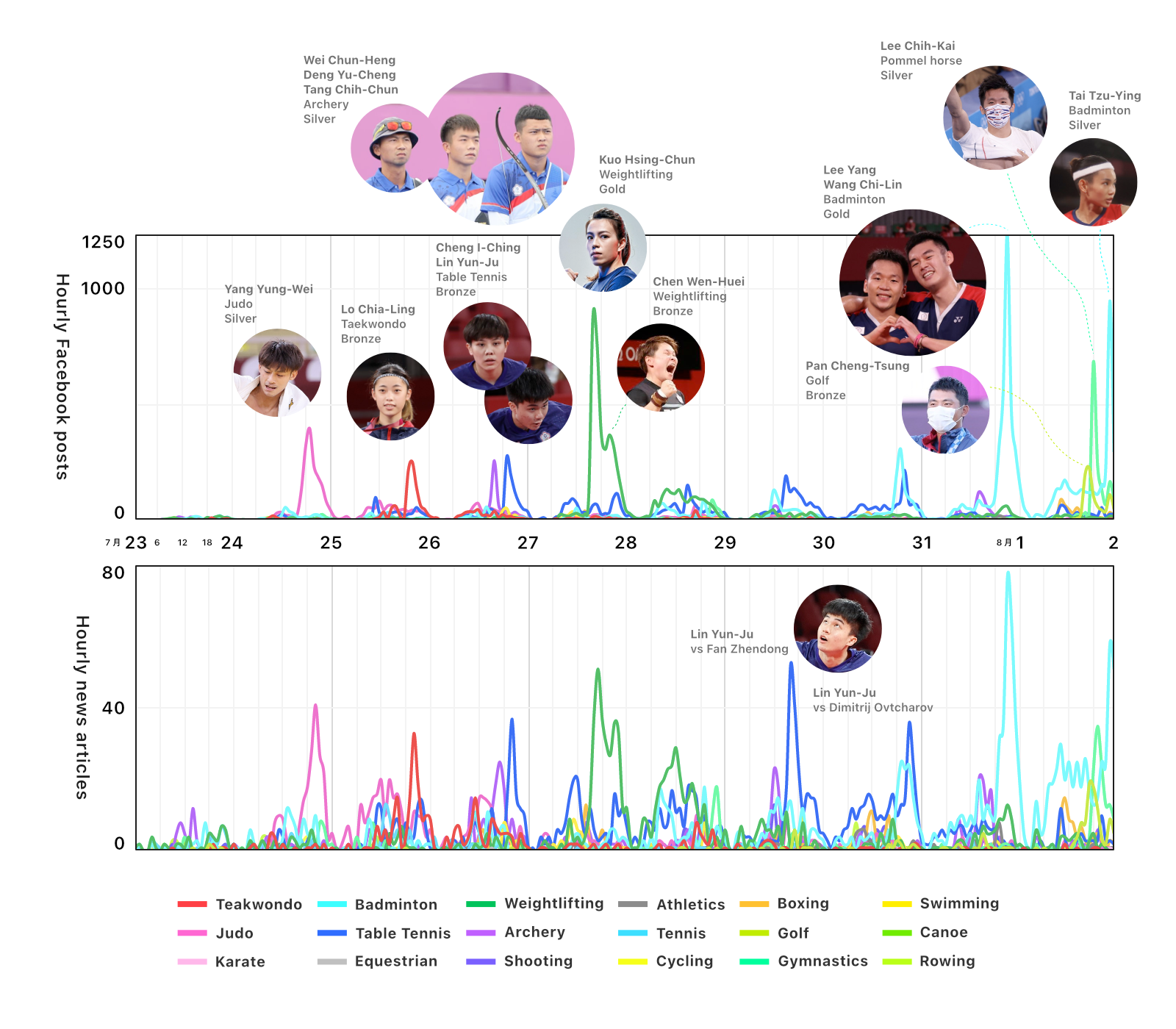 Between the opening of the Olympic games on July 23rd and August 1st, according to IORG’s database which tracks over 45,000 Weibo accounts of Chinese authorities, state media, institutions and accounts with more than 100,000 followers, 83.83% use “China’s Taipei” (中国台北) exclusively when referring to Taiwan’s national olympic team, demonstrating the effectiveness of CCP’s censorship. Among the 23 accounts which only use “Chinese Taipei” (中华台北), only the official accounts of IOC and the Tokyo Olympics have published more than 2 posts. We might be able to suggest that only official Olympic accounts are exempt from CCP’s policies. The deliberate use of “China’s Taipei” by the CCP reduces Taiwan from a sovereign state to a city under China. If the practice of calling Taiwan “Taipei” continues in international affairs, it might make it easier for the CCP to diminish Taiwan.

A vaccine-related suspicious message, claiming that medical personnel “might vaccinate people with Medigen vaccine” (without consent) were found last week. According to IORG’s database, there were at least 20 similar LINE messages being spread up to August 1st. Features of these messages include: adding “Confidential”, “Top Priority” at the beginning of the message, attaching a CTI YouTube link at the end, and including phrases such as “Ractopamine pork traitor party”, “untrustworthy government” in the message. These suspicious messages could undermine trust between the public and medical personnels. There has already been a doctor’s post X-9443-ZUHU of an incident in which a senior citizen asked to “see the bottle” of the vaccine before receiving one, demonstrating real influence of this rumor.

Taiwan’s Central Epidemic Command Center has suggested against including ivermectin in COVID-19 treatment. However, suspicious messages were still found claiming that “India effectively controls the pandemic with ivermectin” and “promoting vaccines is lining the pockets of vaccine companies.” According to IORG’s database, between July 26th and August 1st there were at least 4 related Facebook posts and 25 LINE messages. These messages imply that people shouldn’t get vaccinated. They also create a conspiracy theory, claiming that “western countries” and “mainstream media” reject ivermectin to protect the interests of vaccine companies. This narrative seems to echo another narrative that “COVID-19 can be cured, no need to get vaccinated”, mentioned in the 7th Weekly, with the medicine changed from quinine to ivermectin.

With the Olympic games entering its final week, we need to stay vigilant on related suspicious messages, regardless of their political position being pro- or anti-CCP. For example, anti-CCP businessperson Guo Wengui (郭文貴) recently claimed that “China is releasing virus at the Tokyo Olympics,” connecting to the rapid increase of confirmed COVID-19 cases in Tokyo. In Taiwan, as vaccination rate gradually increases, we must still stay alert on vaccine-related suspicious messages, such as narratives that say “vaccines are useless against the delta variant,” or certain vaccines are “problematic.” 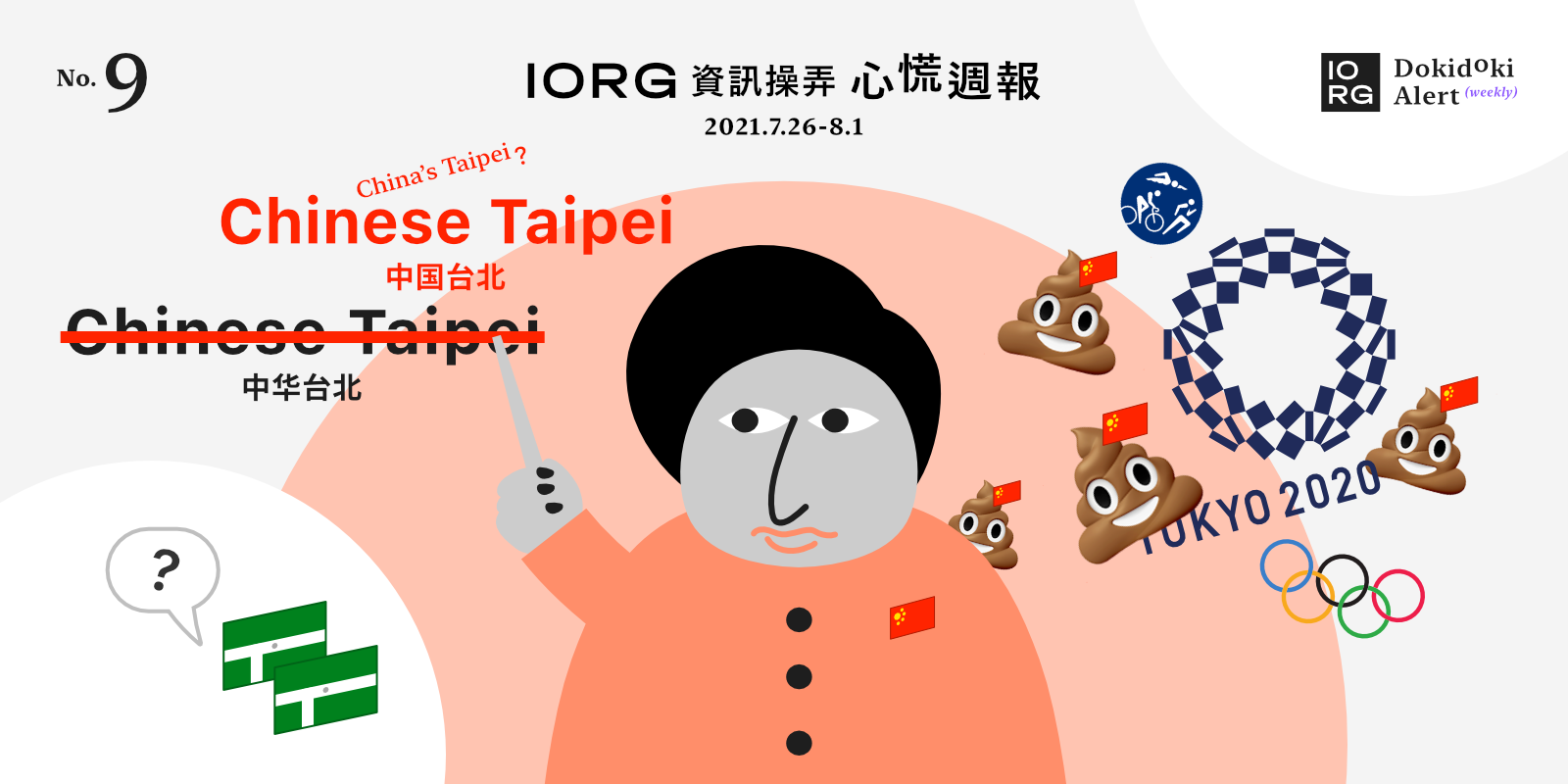