What’s up in May?

In May 2021, local cases of COVID-19 exploded in Taiwan. As case numbers rose, vaccines were seen as the ultimate solution, and information manipulation related to vaccines spread.

The narrative “America hasn’t sold vaccines to Taiwan.” was first observed by IORG from Chinese state media “Tong Shuo” (通說), echoed by “The Reacher” (觸極者), a Taiwanese content farm operated by Lin Zheng-guo (林正國) who is affiliated with the New Party (新黨). Global Times chief editor Hu Xi-jin (胡锡进) and multiple Chinese state media outlets quoted a saying from Taipei City Mayor Ko Wen-je (柯文哲) on May 19th that “America hasn’t sold a single dose of vaccines to Taiwan” (美國沒賣台灣任何一支疫苗). This narrative spread on Facebook, Twitter, and Weibo even after May 27th when 150,000 doses of Moderna vaccines were confirmed to arrive in Taiwan. Moreover, the CCP has seized this opportunity in criticizing the Taiwanese government by reiterating narratives such as “not buying Chinese vaccines is being possessed by political demons” (政治心魔) and “taking vaccines from Japan is using the pandemic to plot for independence” (以疫謀獨). 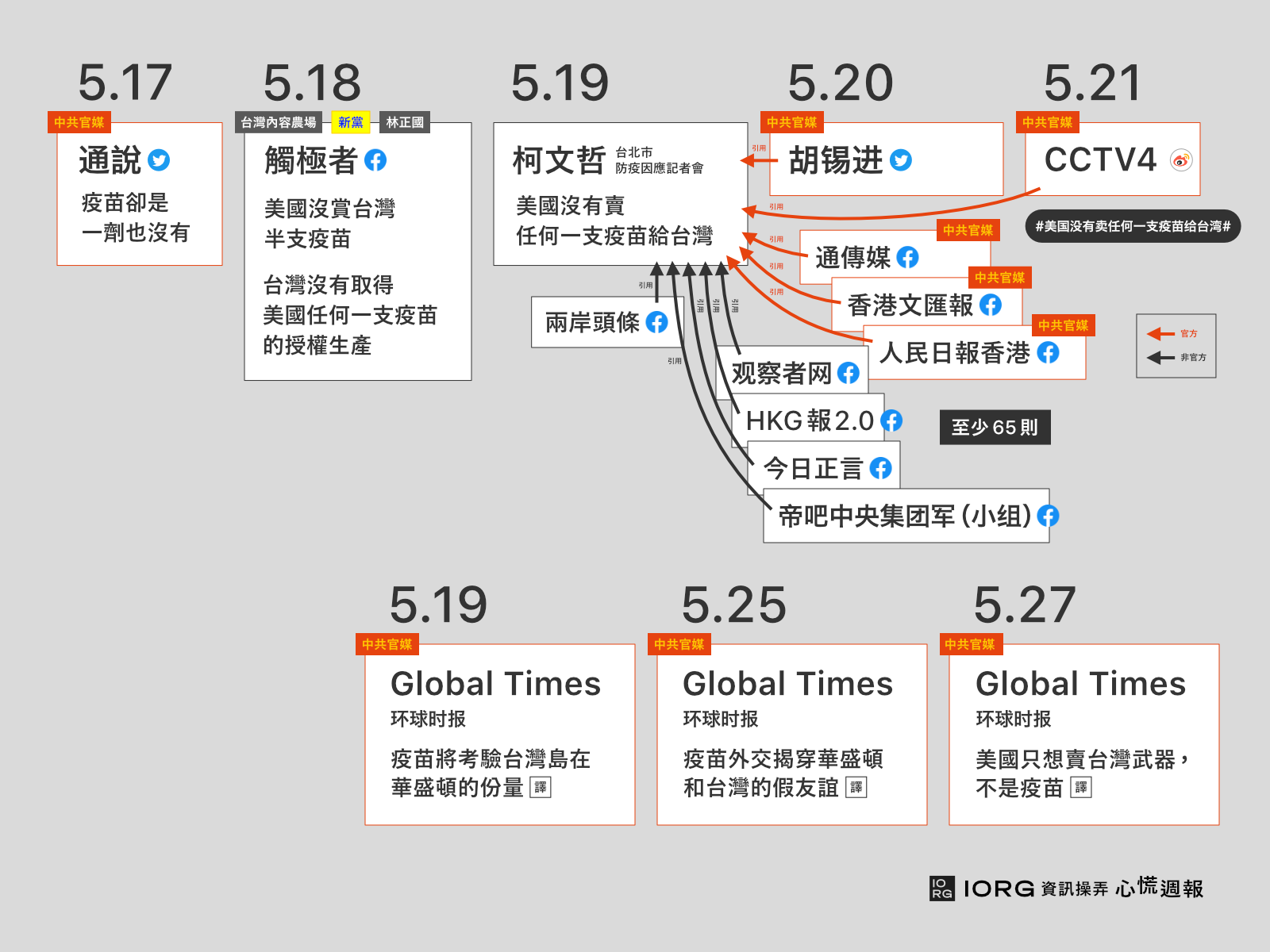 Vaccines are also at the heart of U.S.-China diplomatic battles. On May 18th PRC Foreign Ministry spokesperson Zhao Li-jian (趙立堅) criticized the U.S. for stockpiling vaccines. Two days later, Chinese state media Global Times published a report saying “China has exported 252 million doses of vaccines while the U.S. has only exported 3 million.” It is worth noting that a part of a post published by Facebook page “Sisy’s World News” (文茜的世界周報) on May 21st of the same topic is identical to part of an article published by Chinese state media “Beijing Time” (北京时间). A reference to the source was absent in “Sisy’s” post. IORG considers this as a “source manipulation” type of information manipulation. In IORG’s report published in March 2021, it has already been pointed out that “Sisy” has published at least 10 posts between August 1st and November 4th, 2020, masquerading the source of the content from Chinese state media as U.S. media. 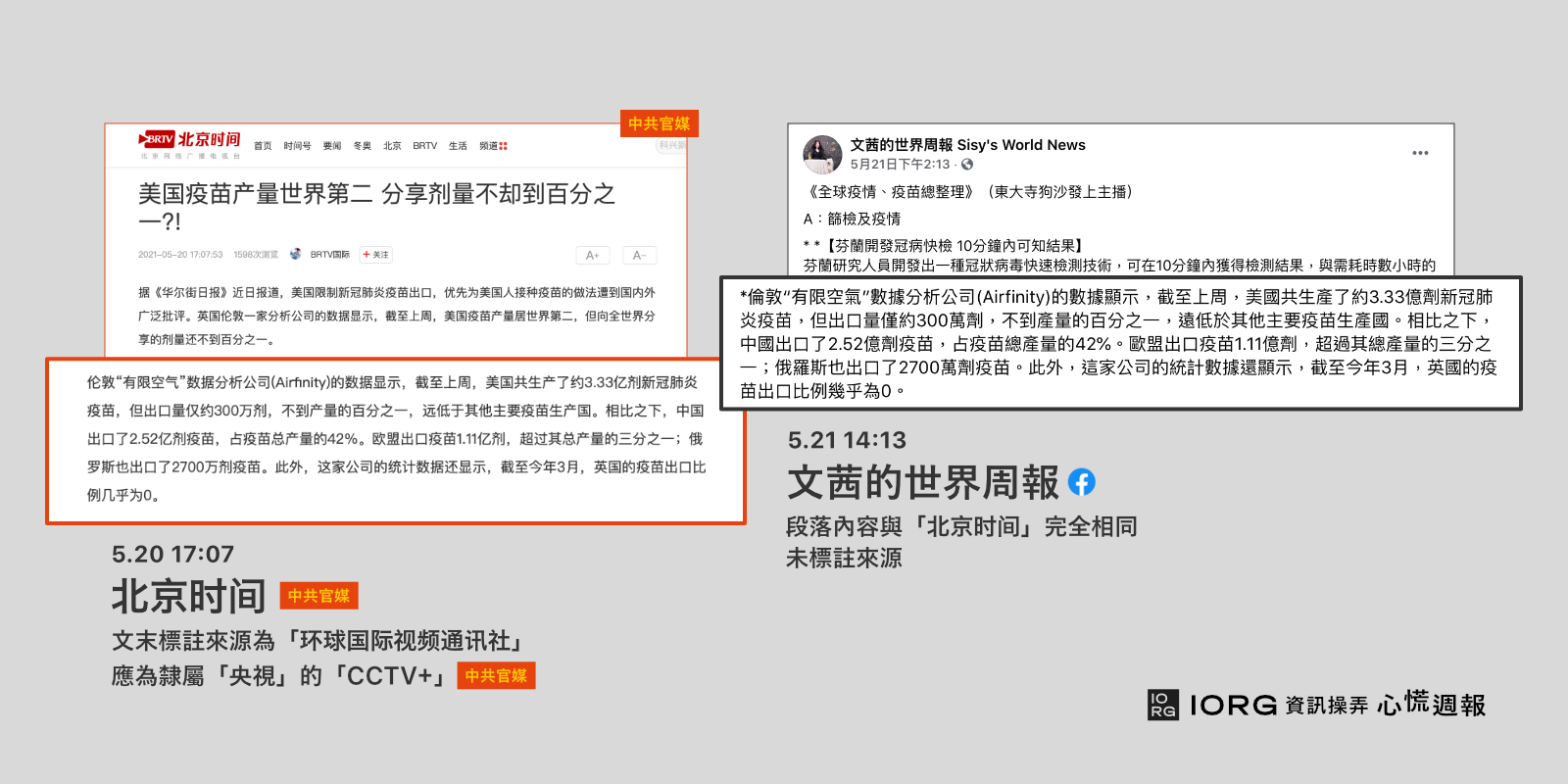 Using audio files to spread suspicious messages, “AZ vaccines are problematic”, “vaccine reservation” phishing website, “origin of COVID-19 virus”, these are all possible topics and narratives of information manipulation that could appear in June and cause harm to individuals and society as a whole. IORG will continue to observe, record, publish scientific evidence and alert reports to remind all of us to stay vigilant.

As pandemic tension continues in Taiwan, the CCP has weaponized vaccines as one of its tools in influencing Taiwanese politics. Its effectiveness will depend on the local collaborators helping, and the Taiwese public stopping the spread of information manipulation. When a pandemic storm hits, it challenges our collective readiness and calls for collective immunity against both the virus and information manipulation. 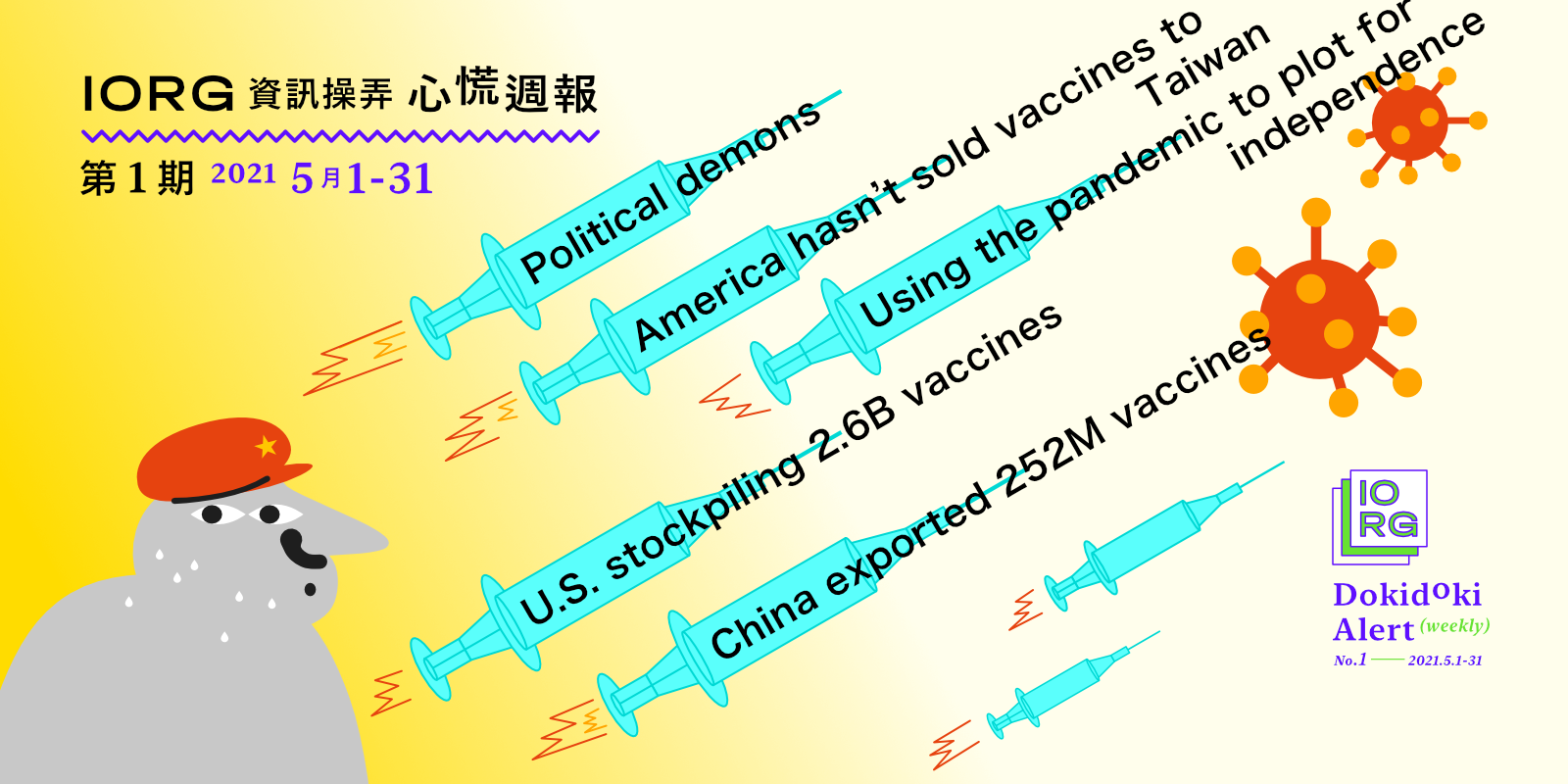