What’s Up in August?

In this Dokidoki Alert, IORG presents 11 narratives of U.S. skepticism related to American military withdrawal from Afghanistan. They are categorized into 3 groups: A. Abandonment theory: “The U.S. will eventually abandon Taiwan”, B. Strength theory: “The U.S. does not have the strength to protect Taiwan”, and C. Chaos theory: “The U.S. is the source of war and chaos.” Stay alert.

Number of Facebook posts daily concerning the U.S. military withdrawal from Afghanistan in August, 2021. There are in total 1,071 posts skeptical of the U.S., including 871 “abandonment theory” posts, 87 “strength theory” posts, and 113 “chaos theory” posts. In opposition to these narratives, there are 1,059 posts opposing skeptical narratives towards the U.S.. Furthermore, there are 1,184 neutral posts. Source: IORG.

Based on the distribution of posts, posts skeptical of the U.S. increased rapidly after the Taliban took over Kabul, the Afghan capital, on August 15th. Posts opposing the U.S.-skeptical narratives matched in quantity one day later. On August 20th, the number of opposing posts surpassed that of the skeptical posts, mostly sharing U.S. President Biden’s statements regarding Taiwan. Following that, the number of both skeptical and opposing posts declined and neutral posts became mainstream.

Taiwanese media and Chinese state media outlets have been found referencing each other’s reports in spreading narratives of the “abandonment theory.” After United Daily News published their editorial “The Shock of Afghanistan,” Chinese state media Global Times and Tong Shuo 2.0 shared its content. After an editorial from Global Times “Why America will eventually abandon Taiwan,” UDN repackaged the content and published “6 reasons why America will eventually abandon Taiwan, listed by Global Times.”

Chinese state authorities and state media have also participated in the promotion of the “chaos theory,” saying that “America is the source of wars and chaos,” assigning blame for unrest in the Taiwan Strait to the U.S. provoking China. Examples include Global Times on the 15th, Foreign Ministry spokesperson Hua Chun-ying (华春莹) on the 17th, spokesperson Zhao Li-jian (赵立坚) on the 18th, Global Times chief editor Hu Xi-jin (胡锡进) on the 20th, spokesperson Wang Wen-bin (汪文斌) on the 24th, and the response of Taiwan.cn on the 28th towards U.S. war ships passing through Taiwan Strait. Aside from Chinese state media, “chaos theory” can also be found in reports by Taiwanese news media such as UDN and CTI. Finally, Chinese state media also promotes the “strength theory,” saying America does not have the strength to protect Taiwan, that it “cannot even handle the Taliban, let alone an all-out war against the PLA.” Examples of such narratives can be found on Xinhua, CGTN, Tong Shuo, and Global Times.

Opposite of the 1,071 U.S.-skeptical posts were 1,059 opposing posts. 294 (27.76%) of these quote official statements made by U.S. government officials. 2 peaks can be observed on the 18th and 20th of August, sharing statements made by U.S. President Joe Biden and National Security Advisor Jake Sullivan on American commitment to Taiwan. The strongest rebuttal to U.S.-skepticism are statements from the U.S.. Additionally, 58 posts mentioned Taiwan President Tsai Ing-wen’s statement that “Taiwan’s only option is to make ourselves stronger, more united and determined in defending ourselves.”

Links shared by U.S.-skeptical and opposing posts are from distinct sources with some exceptions. Links to KMT-leaning outlets such as UDN, CTI, China Times, and qiqi content farms are being shared by U.S. skeptical posts; opposing posts share links to anti-CCP outlets Epoch Times and New Tang Dynasty, or DPP-leaning outlets Liberty Times and Newtalk. 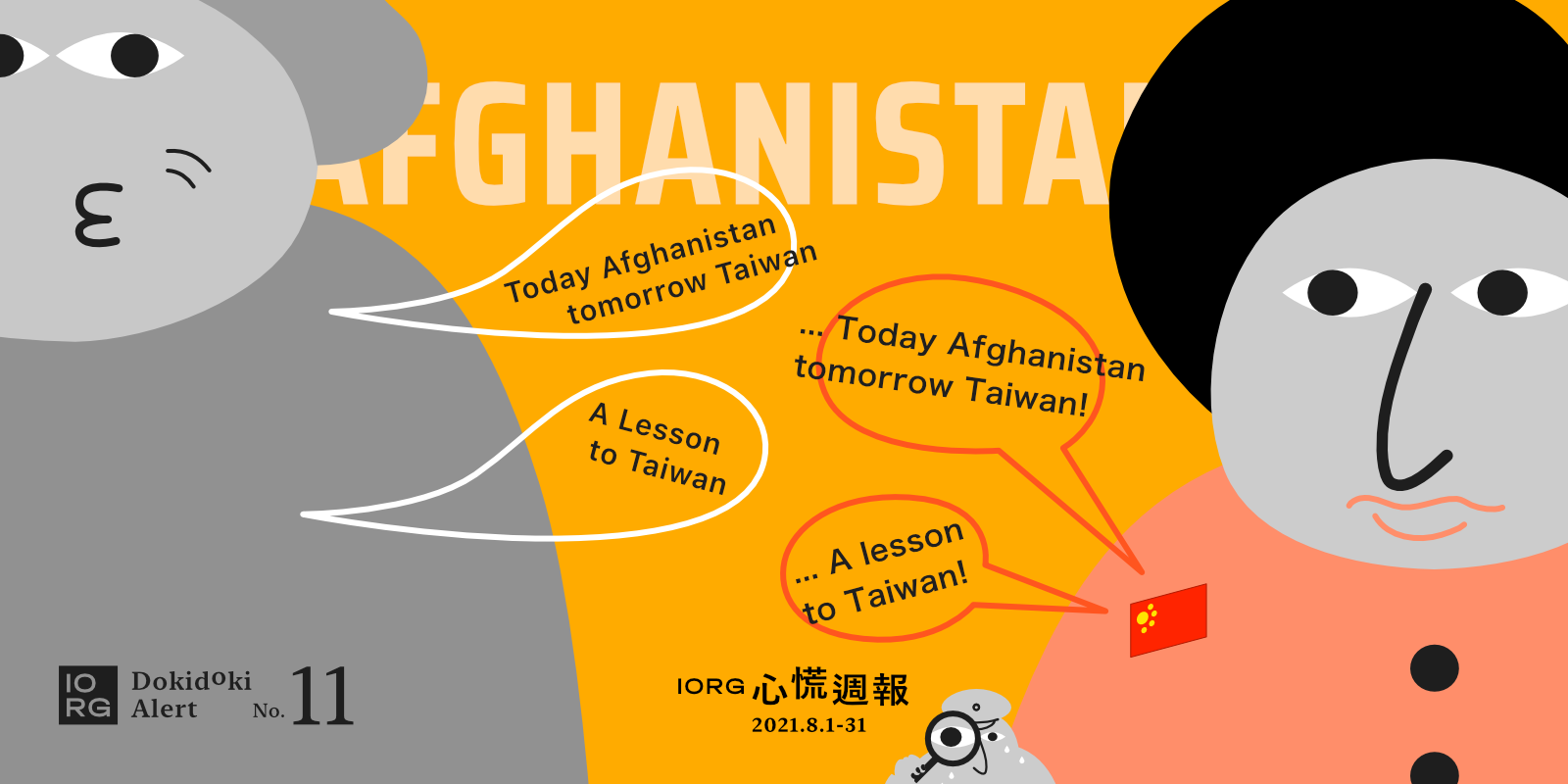 Full version of this Dokidoki Alert is available in Taiwanese Mandarin. Please visit https://iorg.tw/da/11 for more…